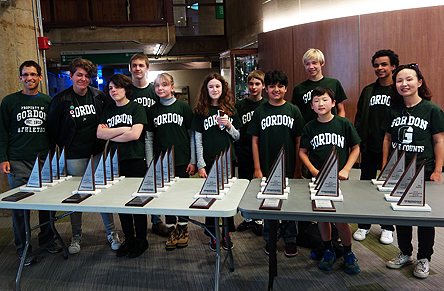 This was the second time in the past three years that Gordon earned first place in both the team and individual rankings.

This was one of Gordon's youngest MathCounts teams in recent memory, with four sixth graders among the ten participants. The team's gender mix also stood out among the twenty other teams in today's competition, which represent the top scorers on a written test given to hundreds of sixth, seventh and eighth graders across the state.

Gordon's first and third place finishers will join two other top scorers to represent the Rhode Island at the national competition in Washington, DC in May. As the coach of the championship team, Eric Kravitz will serve as the Rhode Island coach at the nationals. This is the fourth consecutive year that Gordon has sent a team member to the national competition. Gordon was well represented throughout the top forty scorers, and more details will be posted soon.

More fun facts, based on a partial list of scorers:

Gordon's team was first in a field of twenty-one teams.

Judging by first names, Gordon has two of the top ten females in the state (both of them sixth graders).

Gordon's team is young and talented. Gordon's team had four sixth graders, one of whom took third place overall. For perspective, a total of 165 students competed today and only 26 were in sixth grade.

Mr. Kravitz has dusted off the record books to create this timeline of Gordon's emerging MathCounts dynasty:

This has taken place on a team with high turnover; only one member of this year's team was on the 2016 championship team, and only three were on last year's team.
Gordon has fielded a MathCounts team every year since 2004. Sixth, seventh and eighth graders qualify for the team through a challenging written test given every January.

In 2012, Gordon implemented a new math curriculum, Math in Focus, and hired Eric Kravitz as the schoolwide math specialist. 'The team's performance this weekend reflects the depth of Gordon's math program,' explains Head of School Ralph Wales. 'Having a math specialist has been instrumental in allowing Gordon to challenge every students and provide outstanding professional development to our faculty.'

Gordon's MathCounts team is one of a number of competitive academic opportunities offered each year. Gordon also fields a robotics team which has earned a number of championships, and a Gordon National Geographic Geography Bee champion has gone on to compete in the global competition. A math club for third to sixth graders also meets every week.

The Rhode Island MathCounts competition is hosted annually by the Rhode Island Society of Professional Engineers.
The Wizards of Oz
The first real snow of the year
Best wishes, from the Class of 2019