Travel delays took a bite out of the first day of the 2013 Civil Rights Trip, but the eighth grade is on their way to Atlanta. 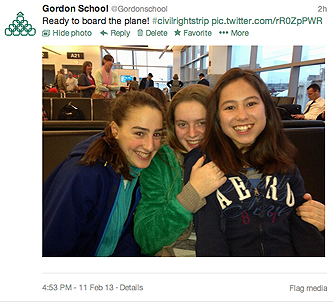 Undeterred by what they found at Logan Airport this morning, students and chaperones cheerfully improvised a day in the Boston area. 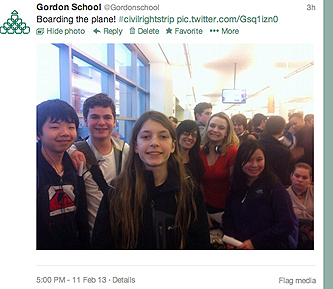 Tomorrow morning, the group will be able to step right into the planned itinerary, with:
• a meeting at Birmingham's 16th street Baptist Church with FBI agent Tina Maldin and prosecutor Doug Jones, who helped jail one of the bombers who killed four girls there in 1963
• a hike across Selma's Edmund Pettus Bridge with Joanne Bland, who was part of the crowd that made that same walk on what become known as Bloody Sunday
• a drive to spend the night in Montgomery, making for a second big day of travel
Chaperones will be tweeting at twitter.com/gordonschool
Go Wildcats!
A family chooses Gordon
Preparing for takeoff