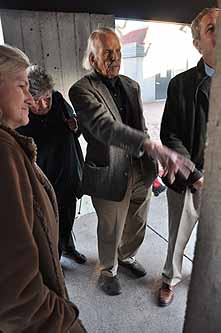 photo: William Warner at Gordon in 2010
Architect William Warner passed away on Monday, August 27th. Warner designed Gordon's campus in East Providence, which was completed nearly fifty years ago in January 1963. During his long career, he referred to his work with Gordon as one of his favorite projects.
In 1961, Warner was selected to help transform an open twelve-acre lot into the new home for the Gordon School. Gordon had outgrown its first campus, on the East Side of Providence. Warner had been practicing architecture for two years. His bold, child-centered design has shaped the experience of everyone who has visited the campus ever since.
Warner's resourceful and imaginative work for Gordon earned him a honor award from the American Institute of Architects in 1965, the highest honor granted by the professional association. The jury cited the 'appropriate scale and use of simple inexpensive materials' in Gordon's 'community of spaces well fitted to the site.'
Gordon's relationship with Warner continued throughout his life, and he and his wife were honored guests at the festivities for Gordon's 2010 Centennial Celebration.
In a 2010 visit to Gordon, Warner spoke about many of the details of the design, revealing that he created his first—and only—bronze casting for Gordon. The plaque, which hangs in front of Gordon's trademark bell tower, reads
Founded in 1910 by Helen W. Cooke in the belief that the heart and mind should be educated with equal care
and is often quoted when Gordon's core intentions are described. 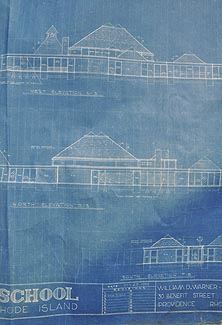