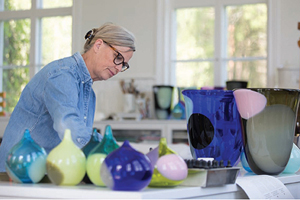 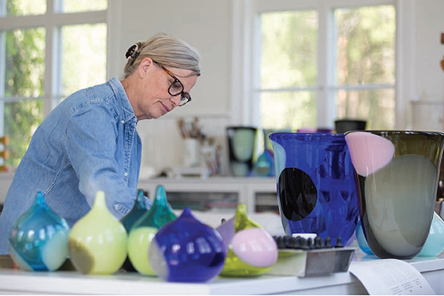 To mark this milestone anniversary, Gordon chose to invite back an artist for a second residency. Ms. Sahlin first came to Gordon in 2007, when many of this year’s eighth graders were in Nursery.

above: to promote a recent retrospective, Sahlin’s image was on the back of public buses throughout Sweden

From April 3rd to April 21st, she will work in the studio with Gordon’s third and fifth grades, as well as eighth graders in the visual arts elective. She will give two artist talks that are open to the public, Tuesday, April 4th at 10:50am and Tuesday, April 11th at 10:30am.

Ms. Sahlin is one of the designers who has made Swedish glassware famous around the world. In 2015, she was given the title of Designer of the Year by the Svensk Form, and in the fall of 2016, she had a retrospective at the Vasterbottens Museum in Gammlia, Umea.