Shakespeare in the streets 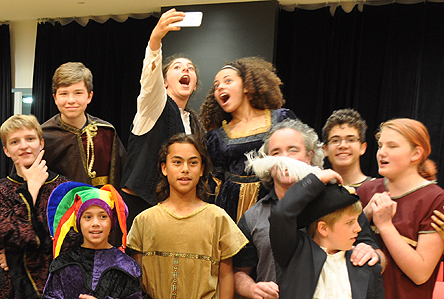 above: some of the cast of Gordon Summer Theater's production of Twelfth Night
Gordon will be part of the Providence Fringe Festival once again this year, presenting Shakespeare's Twelfth Night at the Family Fringe afternoon on Saturday, July 25th.

The students and alumni who participated in June’s Gordon Summer Theater have been invited to reunite and revive the production they developed over those two weeks. At Gordon Summer Theater, twenty Middle School students had daily master classes with Trinity Rep performers, and developed their take on Shakespeare’s comedy every afternoon. Their work was then presented to a eager crowd of friends and family, Friday June 26th.

Last year, Gordon students were part of the first Providence Fringe Festival, performing iPan, their adaptation of J.M. Barrie’s classic Peter Pan. Gordon alumni Nate Talbutt ’14 and An Nguyen ’14, who performed last year, will join their former classmates this year as well. In the words of director Milly Romanzi, “Gordon's participation is notable as the only performance by students in the festival, and is an important symbol of connection to the broader community in which we live here in Providence.”

Family Fringe is a daylong event, and the Gordon performance is scheduled for 1:30 to 2:15pm. The goal is to provide a family-friendly, safe, outdoor celebration where children and families from across Providence can come together. Families are encouraged to bring a blanket or beach chairs (and a picnic lunch), set up for the day, and enjoy activities like face painting and sculpture with CityArts or create their own urban landscape with the Providence Children's Museum's 'big blue blocks,' games with teaching artists from The Wilbury Theatre Group, and live performances from the Manton Avenue Project, Big Nazo, Mark Binder, and Paul Valenti..

The event runs from 10:00 AM until 3:00 PM at Peace and Plenty Park in Elmwood, Providence. It is free and open to the public.
Dream, Design, Do!
Sparing a rose to help others
Competitive academics heat up