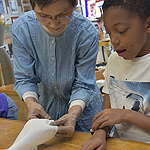 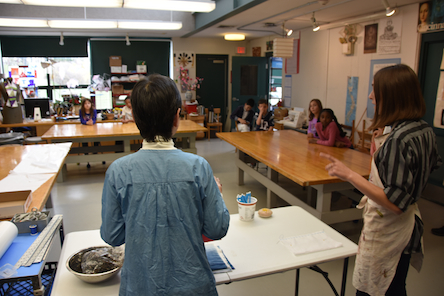 It has taken five years to arrange for this residency. 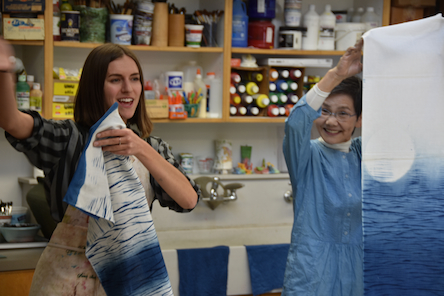 Harada-san is a master of indigo dyeing techniques that are hundreds of years old. 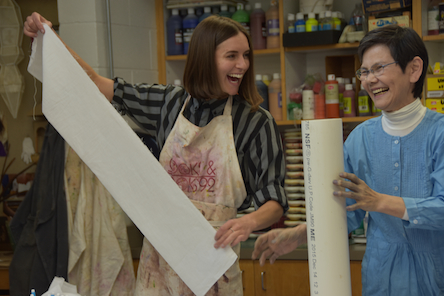 But there was no time for long introductions today. 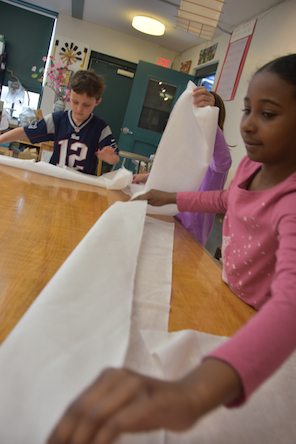 She got the students working five minutes after they arrived. 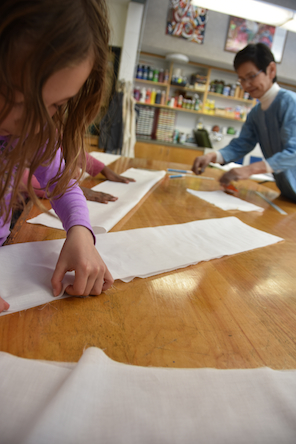 They will learn a different technique each week. 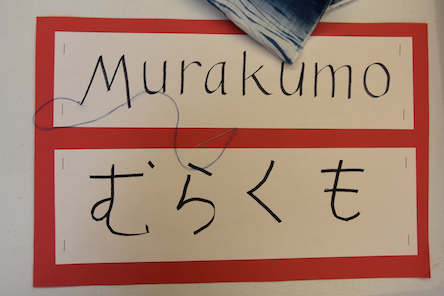 This week’s technique is murakumo, named for a Japanese word for clouds. 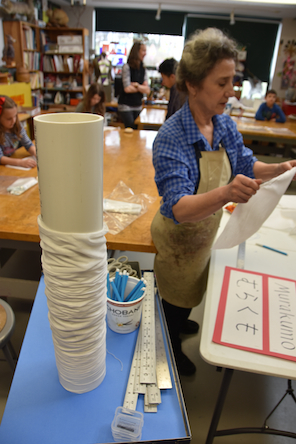 The first step was to stitch the coarse cotton into sleeves, that would slip snugly onto PVC tubes and dipped into the dye. 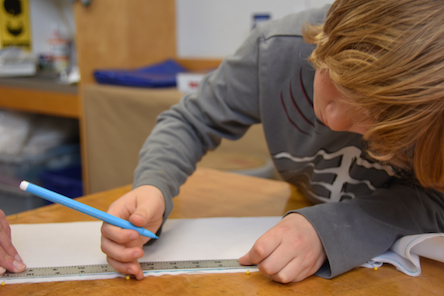 These students already knew about sleeves and seams from their work making pillowcases, and from their applehead doll projects. 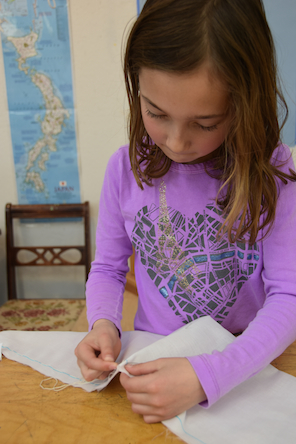 In fact, the students needed to do as much un-learning as they did learning today. 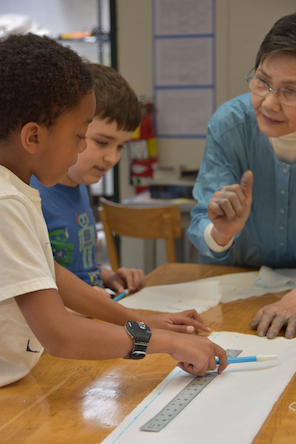 For this project, a single stitch will be easier to remove than the double stitch they are more familiar with, and a loose, irregular stitch length will make a more interesting pattern in the finished product. 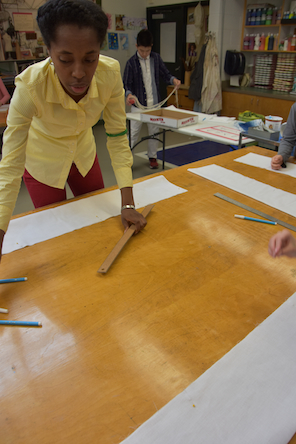 The classroom teacher worked alongside her students. 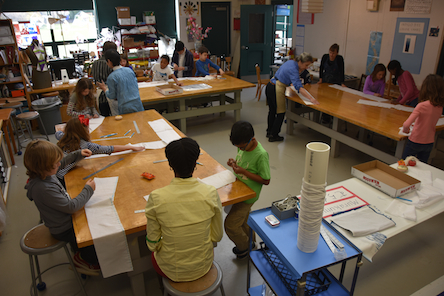 With Harada-san, her translator, Nellie, and her thirteen-year-old grandson, as well both of Gordon’s fulltime visual arts teachers and the classroom teacher, there were six people working with the eleven students. 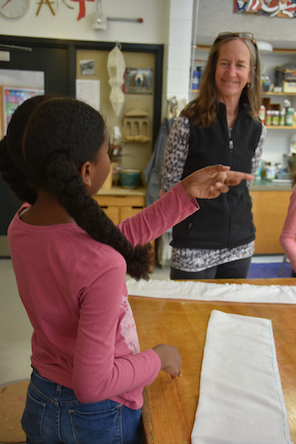 Then, the third graders’ science teacher stopped in to watch. 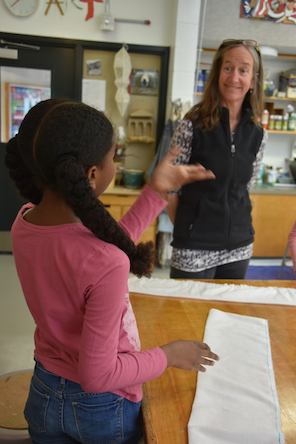 A student immediately caught her up on everything they had learned thus far.

In the second half of today’s lesson, the class got a preview of the science behind the dyeing process. 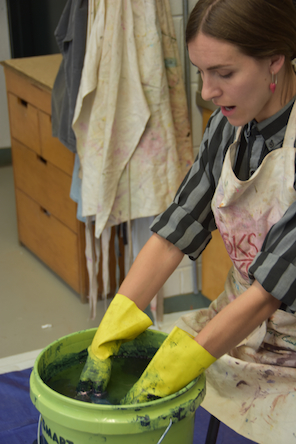 The dyeing of the cloth needs to happen in an anaerobic environment—beneath the surface of the dye—and Harada-san and Nellie demonstrated how to submerge the cloth without introducing too many bubbles. 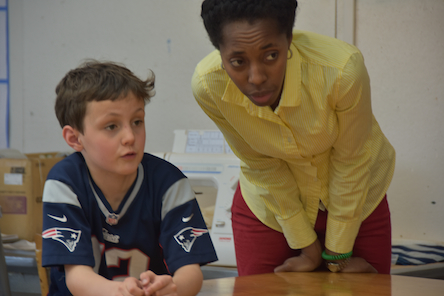 After a few moments, the cloth emerged.

It was a beautiful green. 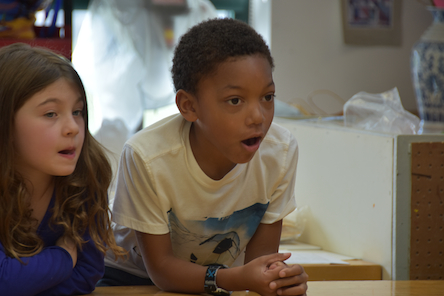 As the students scrambled to explain why it might be green, not blue, the cloth slowly ripened into the deep indigo they had expected. 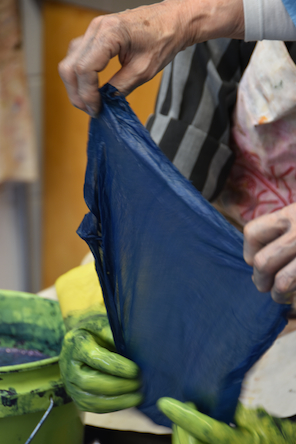 It was a lesson in oxidization they will not soon forget. 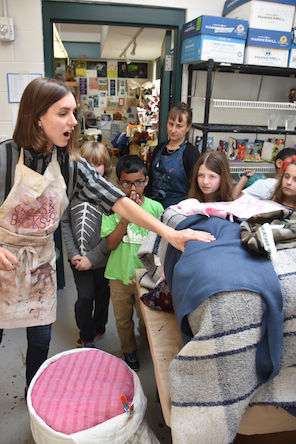 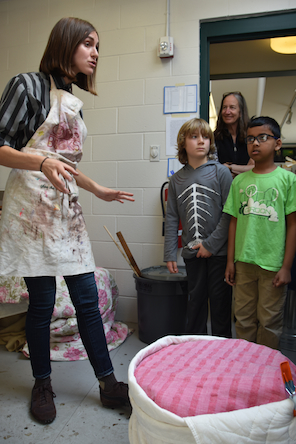 In the last moments of class, the students got to see the vats of dye they will use in the project, tomorrow. 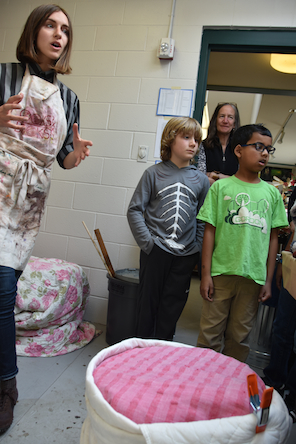 For several weeks, these vats of traditionally prepared dye have been fermenting. 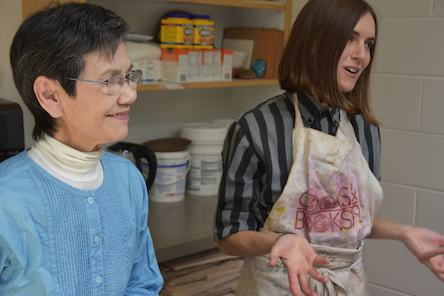 This milder brew gives a fuller range of colors, and is safer to handle, than the commercial dye. 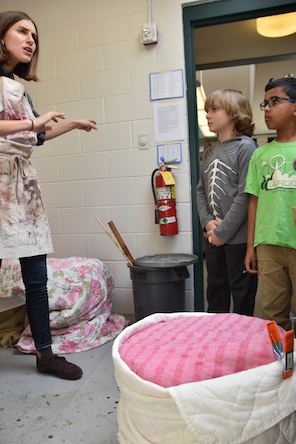 The process literally has a life of its own, nursed along by the teachers who keep the vats swaddled, and feed the bacteria corn starch and sake. 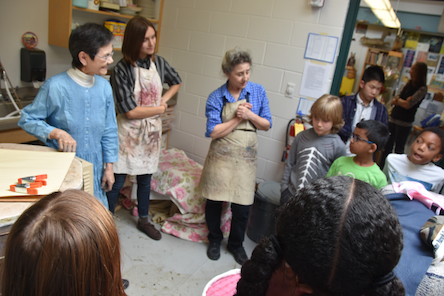 This is the solution they will dip their sleeves into tomorrow, in day two of their three week adventure with Harada-san
Craft and create
Jul 22 2022