Finding mentors through the performing arts 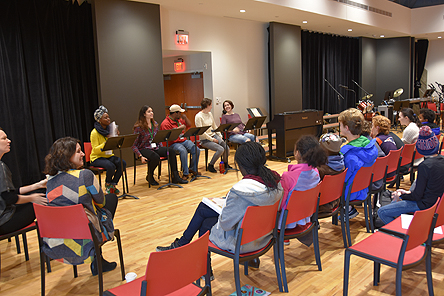 above: the seventh and eighth grade playwriting elective meets with Trinity Rep’s playwright-in-residence, member of Trinity’s directing staff and the acting company, and graduate students in the Brown University / Trinity Rep MFA program.

Gordon students find many mentors through the performing arts.

Some they might meet only once. Others might stay in their lives throughout their time at Gordon.

Yesterday morning, students in seventh and eighth grade playwriting elective hosted visitors from the Brown University and Trinity Rep Master of Fine Arts program. Instructors, graduate students and Trinity Rep performers gave a staged reading of the Gordon students’ work, and Trinity’s playwright-in-residence, and one of their staff directors, offered feedback in a warm and affirming dialogue. 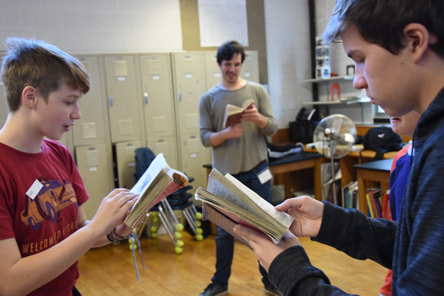 above: a graduate student from the Brown University / Trinity Rep MFA program directs Gordon eighth graders in a scene from Romeo and Juliet, November 2016

It’s one of a number of times that Gordon students work with the Brown / Trinity Rep program this year. MFA students spend a day with Gordon eighth graders each fall, coaching them on their Shakespeare monologues, and Trinity resident artists lead workshops during Gordon Summer Theater camp every June. The most recent third and fourth grade musical was written by one of last year’s MFA students, who was on campus working with the cast throughout the rehearsal process.


At Wednesday’s Middle School winter concert, the seventh and eighth grade choral ensemble performed the Syrian-Iraqi song Fog Elna Khel (above, and linked at YouTube). The piece was arranged by Salim Bali of Aleppo, Syria. Ms. Barsom-Morcos, one of Gordon’s Nursery teachers, coached the ensemble on the Arabic pronounciation. Many of the singers have known Ms. Barsom-Morcos, who was born, raised and educated in Syria, since they were three-year-olds in her classroom. At November's Independent School Choral Festival, they got to perform this piece for scholar Andre de Quadros, who had included it in his anthology Choral Music of the Muslim World.

During Friday’s all-school assembly, students and alumni will pay tribute to Chrys Alam, who taught at Gordon for over thirty years before retiring last spring. Ms. Alam’s life-changing impact was reflected in remarks Ping Pomrat ’12 made when he was in eighth grade (above, and linked at YouTube), and, more light-heartedly, by this year’s fifth graders in a more recent video (below, and linked at YouTube). The tributes to Ms. Alam come a week after Trevor Dorman ’11 and his Dartmouth College a cappella group honored Gordon’s Director of Fine and Performing Arts, Milly Romanzi.
Dream, Design, Do!
Sparing a rose to help others
Competitive academics heat up